The wealthiest investors are ramping up on this asset

Amid concerns about trade wars and political dysfunction, the wealthiest investors are padding their cash cushions.

Members of TIGER 21, a group of about 700 individuals with at least $10 million to invest, increased their allocation toward cash and cash equivalents to 12% from 10% during the firstquarter, according to the group’s quarterly report.

“Basically, members are concerned on the one hand,” said Michael Sonnenfeldt, founder and president of TIGER 21, which stands for The Investment Group for Enhanced Results in the 21st Century.

“They see the China trade wars heating up, the growing deficit and instability, but the economy is strong, as well,” he said.

By raising cash, investors are protecting themselves against having to liquidate on short notice, said Sonnenfeldt.

In doing so, they have also positioned themselves to invest in opportunities as they arise, he said.

Group members shied away from adding to their fixed income holdings. That asset class accounts for 9% of their holdings, similar to the fourth quarter of 2018. 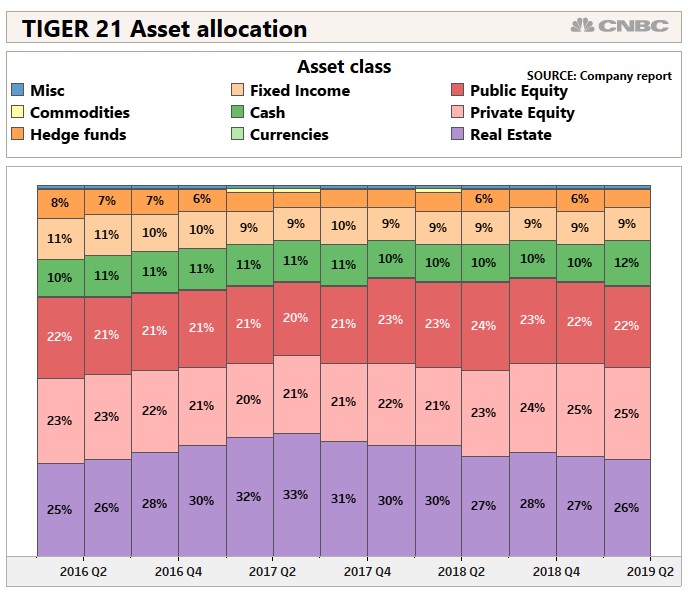 “The yield curve suggests rates won’t be rising for a while,” said Sonnenfeldt.

“Many people can’t figure out how we can have such a huge deficit and then interest rates for the long-term are so low, ” he said.

Members aren’t exactly fleeing risk altogether, but they have pruned some of their exposure to certain asset classes.

For instance, they reduced their real estate exposure to 26%, down from 27% in the fourth quarter.

TIGER 21 members also pulled back a bit on their hedge fund holdings, cutting their exposure to 5%. In the fourth quarter of 2018, this asset class accounted for 6% of their portfolio.

“I think members are in one sense fully invested, and on the other hand, they’re raising cash so that they don’t need to liquidate,” said Sonnenfeldt. “They’re a little on the gas and a little on the brakes at the same time.”

Private equity holdings remained steady from one quarter to the next, accounting for 25% of their allocation.

“Our members are entrepreneurs,” Sonnenfeldt said. “They’ve made their money in private equity and owning businesses and real estate — all of those succeed best when you have liquidity.”

More from Personal Finance:
How to keep your investments safe in a trade war
Retiring with a health savings account? Avoid these snags
Avoid this risky move to finance college

Coolest and weirdest things, from robots to air taxis

Phase 2 starts for most of Virginia this Friday; Full guidelines released