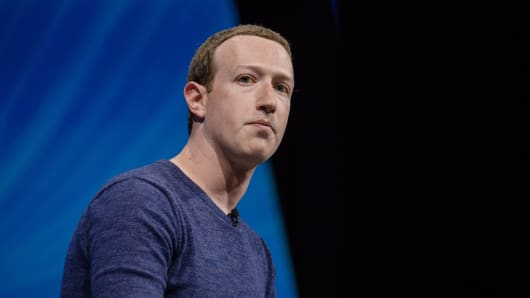 Mark Zuckerberg, chief executive officer and founder of Facebook Inc., listens during the Viva Technology conference in Paris, France, on Thursday, May 24, 2018.

Facebook content moderators in the U.S. have resorted to extreme measures to cope with the stress of viewing graphic and offensive material on repeat, according to a new report from The Verge.

In a wide-ranging exploration of working conditions at Facebook’s content moderation facility in Arizona, which is operated by a vendor called Cognizant, The Verge described an office where employees cope with intense stress by using drugs and having sex at work. One employee told The Verge that he even brought a gun to work because he feared retaliation from other former employees.

The moderators are reportedly paid $15 per hour to work through a queue of content that could range from offensive jokes to potential threats to videos depicting murder.

Contracted moderators get two 15-minute breaks, one 30-minute lunch and nine minutes of “wellness time” per day, The Verge reported, but much of that time is spent waiting on long lines for the bathroom where three stalls per restroom serve hundreds of employees. Some use these stalls as places to have sex at work to cope with the stress. Others have resorted to lactation rooms, which became such a problem last year that management removed locks from the doors, The Verge reported.

Some employees used drugs at work to numb the pain. Workers described to The Verge regularly smoking marijuana on the job and joking to each other about “drinking to forget.”

One former Cognizant worker said he had started bringing a gun to work in hopes of protecting himself and he continues to sleep with a gun nearby even now that he’s left. He said he feared threats from fired employees at the time, which included warnings that they would hurt their former colleagues. The worker said he began to believe some of the conspiracy theories he was exposed to at work, like that 9/11 was not a terrorist attack or that the Las Vegas massacre was committed by multiple gunmen, even though the FBI has said it was committed by one gunman.

The worker has since been diagnosed with post-traumatic stress disorder and generalized anxiety disorder, he told The Verge. When The Verge asked a counselor at Cognizant about risks of contractors developing PTSD, the counselor instead said some people can experience “post-traumatic growth,” where trauma victims become stronger.

Read the full report at The Verge.

Watch: Why this former insider thinks Facebook’s metrics may be misleading

NFTs Are Here. But Where Are They Headed?

NFTs Are Here. But Where Are They Headed?

It’s a charger sale: Save up to 40% on a trio of ways to power your phone, laptop and more